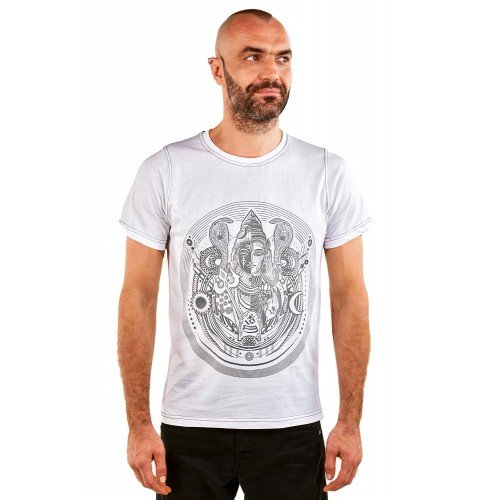 Ardhanarishvara represents the synthesis of masculine and feminine energies of the universe also known as Purusha and Prakriti which illustrates how Shakti, the female principle of God, is inseparable from Shiva. The union of these principles is exalted as the root and womb of all creation. Ardhanarishvara is a symbol of Shiva's all-pervasive nature. When Bramha the creator god created all male beings, the Prajapatis, and told them to regenerate, which they were unable to do. Confronted with the resulting decline in the pace of creation, Brahma was perplexed and contemplated on Shiva for help. To enlighten Brahma of his folly, Shiva appeared before him as Ardhanarishvara. Brahma prayed to the female half of Shiva to give him a female to continue creation. The goddess agreed and created various female powers from her body, thereby allowing creation to progress.

This Ultra comfortable, Durable, Trippy Psychedelic Graphic Design Printed Psy T shirt will keep reminding you and others how ShivaShakti are Inseparable since eternity.